(tap tap tap) This thing on?

Holy Mother of Pearl, can this be content? Well, I guess only you can tell me that…

Things have been… hectic… over the last year. I’ve missed posting on here though and have been tangentially keeping up with the EDH world, mostly through mtgcommander.net and generaldamagecontrol.com. I’ve just started playing EDH again, and have been teaching it to my girlfriend – it’s really interesting getting a new player’s perspective on the format, especially one who is (practically) new to Magic. I’ll be posting more about that – and may ask her to write a guest piece – sometime soon. (Update: I’ve asked her and she’s keen – upcoming post sometime in November after final exams)

What has finally pushed me over the edge though, and forced me to start posting here again, is this guy:

Where was this guy a couple of years ago? The last time the Commander Precons came out, a lovely little lady called Nin, The Pain Artist was released onto the unsuspecting world. I ended up choosing Nin as my R/U general for my Deck Building Challenge of Doom™ – one general of each (legal) colour combination. Nin’s general theme is “here, have some cards. Now HOW DARE YOU HAVE CARDS I KILL YOU” with Psychosis Crawler, Sudden Impact, Molten Psyche, and friends.

AND NOW THERE IS

The problem (and it’s very much a “first world problem” problem) is that my Nin looks like this: 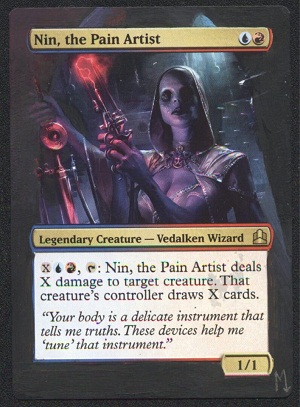 (Alter done by MTG Card Extensions on Facebook. Check out her work here)

Also, I already have a UBR deck – Tribal Vampires, headed by Garza Zol. It’s not a great deck, but it is fun to play and I was going to swap out Garza Zol for the other new hotness in the upcoming UBR deck, Jelava:

Now admittedly Jelava doesn’t have a lot to do with my deck other than her creature type, but she’s new and exciting and the art isn’t as bad as Garza Zol (hint: Nothing Is), and she’s considerably cheaper. However, I’m reasonably fond of the Vampire deck as it is. I could theoretically drop the blue out of it and run it as a B/R build, since I don’t have a B/R deck. The planned B/R deck was going to be a Wort, Boggart Auntie goblin tribal, but I haven’t actually started to build it yet, although I have a number of ideas and I’d quite like to build it.

Basically I can’t make my damn mind up. I really do want to add black to my Nin deck – do I just suck it up and have two (completely different) UBR decks? That would leave a hole in UR, plus I’d have an altered Nin who wouldn’t be the general. If I make the Nekusar deck do I retire Garza Zol? Do I make Garza Zol RB (probably with Olivia Voldaren at the helm) and forget the Goblin Plan?

Whoever said options are a good thing?!?

So, to the polls! (This is also a not-very-sneaky way of seeing if I can stimulate some interest in this blog again 😛 ) Vote for as many options as you like; Should I keep or change Nin? Should I have two UBR decks? If not, should I have to RB decks? Vote early and often!

Footnote: If anyone can tell me how to do those fancy mouseover card images on this site, I’d be mighty appreciative. As far as I can tell, it needs Javascript, and I can’t run Javascript on this (free) site, but can if I move to wordpress.org and host it on my own server – except I don’t have one of those, and have no intention of getting one. I’m pretty happy to stick with the links to magiccards.info for now, but if some clever clogs out there knows a better way, please do let me know!

Cheers all, good to be back 🙂

Posted by Viperion on October 16, 2013 in Challenge of Doom, EDH/Commander